Years ago a dark door opened and an army of evil entered to rule the world. The hero who saved the world at that time closed the door of the devil with all his might to defeat all evil forces and save the world. A battle between demons forced the hero to sleep in the castle to recover. And years later, now an army of evil has invaded the Devil’s Gate again. The king wakes up the healing hero and asks him to stop the evil demon army. As a hero, you must save the world and defeat the leader of the evil army.

– If you catch the boss after progressing to 50 waves, you win the game.

The main game element is defense. Since the monsters that have to block the defense have difficulty, we set the level of difficulty to the point where it is difficult to clear if you do not use all the features given in the game.

50 Waves Hero is a defense game with log likes and growth elements. Players must grow heroes, defeat creatures, discover secrets, and fight against enemies entering the castle for a set period of time.

Abilities that vary from item to item 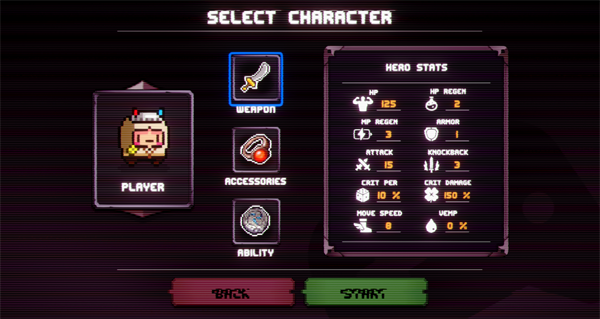 ㅤPlayers can choose items for their hero before the game starts. For weapons and accessories, the character’s stats are determined according to the item, and the player’s special ability can be selected in the ability item column.

ㅤIn the picture on the left, an icon with a locked item is a locked item. There is an unlock element in this game, and you can unlock the item by eating the item on the map. So, if there is an item with the desired stat, you can go around the map and eat the item to unlock it. The unlocking elements in the defense game can take longer play time and make you attach to the game.

ㅤBosses appear every 10 waves. When the boss attacks the castle, it has the power to destroy the castle at once. So the player must defeat the boss before it reaches the castle. Unlike other wave monsters, the boss has high stamina and damage, is slow, and the difficulty increases as you go to the next boss.