Inspired by classic Japanese shooting games, Danmaku Unlimited 3 is a lovingly crafted medley of the best aspects of Japanese bullet hell games, all in a polished, accessible package.

An old school shoot’em up? Why is it worth my time?

Bullet hell style mechanics is having a kind of renaissance with its inclusion in many hit indie games. However if players want to explore more into the world of Bullet Hell a lot of traditional titles can be hard to understand in its mechanics or just plain too difficult to get into as a newcomer.

Danmaku Unlimited 3 is designed to be intuitive and accessible to players unfamiliar with the genre, all the while without losing any of the intensity and flashiness that makes the genre so exciting to play.

Okay, so how does the game do that?

CORE A staple feature in Bullet Hells, only the very center of the player’s craft, the core, is vulnerable to enemy fire.

GRAZING Get the core close to bullets to just barely "graze" it will power up the player’s craft. Once fully charged it can unleash a powerful rampage that makes you feel like a total boss.

SPIRIT/GRAZE SYSTEM Shooting down enemies turns their shots into harmless ghost bullets that the player can safely touch while also powering up the plane. 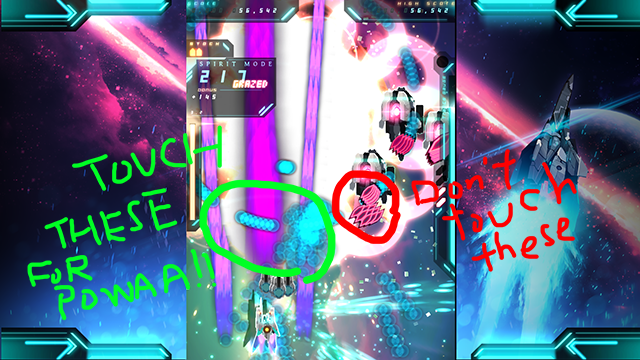 All of this allows the game to be at a level of challenge that is manageable for a wide range of players without reducing the game into a bullet free turkey shoot.

I’m good at bullet hell shooters, won’t I just breeze though the game then?

The game has two unique modes, GRAZE MODE features a differently tuned system (with conditions to trigger the ghost bullets) that offers a higher level of challenge comparable to the toughest traditional bullet hell titles.

Is there a story?

It is about a guardian, entrusted with Earth, rebelling against her overseers. Shakespeare it isn’t, but you are here for the bullets and explosions right?

How is the music? A Shmup is nothing without good music!

Music is by BLANKFIELD from Japan, who does awesome remixes of Touhou and many other anime/game musics!

Okay I’m sold! (Or not, if so then thanks for making it down to here!)