Elsie is an indie action-platformer filled with rogue-like mechanics such as perma-death, procedurally generated levels, and a wide scope of items and weaponry to make each run as unique as possible.

Handcrafted Rooms: Each room in the world is designed by us and then stitched together to create more variety in level design but still maintaining full control over the level experience.

Rogue-like: Every run is different and unique. Level structure, shops, augments, treasure, challenges, bosses will all be randomly generated as your work through the robot infested levels.

Tons of customization: With our leveling system, every playthrough of the game will have a different flavor to the gameplay despite playing the same character. You might play one run focusing combat with a gun and the next will be a parry focus build, or even a hybrid of different elements.

The Choice is yours: Every class has unique pools of Augments, Weapons and Skills. Shops have many unique items to pick from to further change your experience. You can even pick the order in which to tackle most of our levels. Tired of going the same route? Change it up. If you’re finding the game too simple or too difficult, you can add modifiers to your run to change how the game plays out. Add more mayhem or make it a bit easier. It’s all about choice.

Elsie and Dr. Grey are the mother-daughter scientific team that created the Sapir Wharf and the magitek technology of Planet Ekis. During the creation of their latest project, the Arclight Core, there was an accident which resulted in Elsie being seemingly obliterated.
After the incident, the planet began to destabilize and encounter catastrophe after catastrophe with no clear cause behind it. Dr. Grey commandeered the Wharf project and began her research into the incidents occurring planet-side 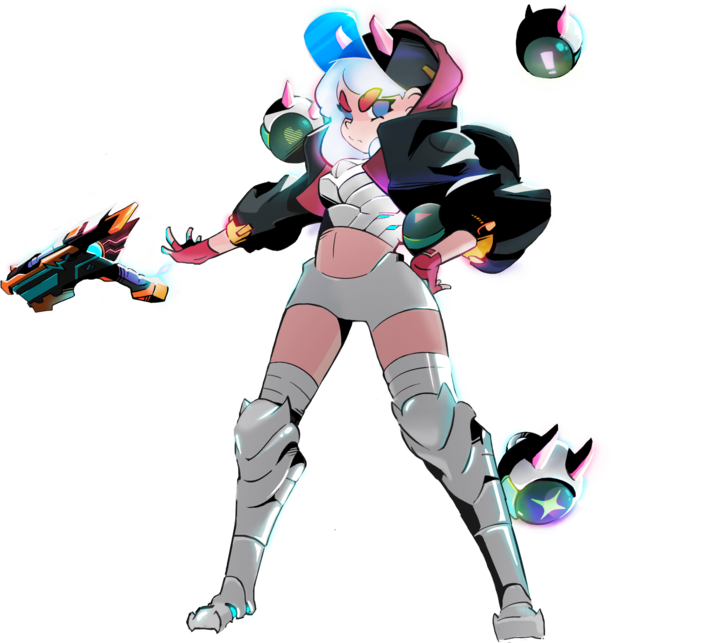 The Wharf, which was originally developed as an orbital docking platform, was repurposed to serve as the staging ground for the fight against the devastation sweeping across the planet after the Arclight Core accident. A force of Guardians was developed as a way of managing the disasters occurring across the planet while Dr. Grey continues their research.
Sometime after the accident at the Wharf, Dr. Grey creates one more guardian. An android in the image of her lost daughter, Elsie. The android Elsie is unique in the way that her internal magitek engine was designed with technology derived from the Arclight Core project.

It was only after some ground was beginning to be won in controlling the disasters that a series of mysterious spires erupted from both the earth and sky across Planet Ekis. All of the Guardians stationed at the Wharf were sent out to investigate these spires. All except Elsie. It was during this time that the attack on the Sapir Wharf began. An overwhelming wave of robots attacked the Wharf to devastating effect. Before Dr. Grey and Elsie had any time to react and activate the Wharf’s defenses, the battle was already over. Dr. Grey is gone. After the attack on Sapir Wharf concluded, Elsie was determined to find out why this happened, and who was behind it all. She sets out to investigate these spires and where all the guardians have gone.