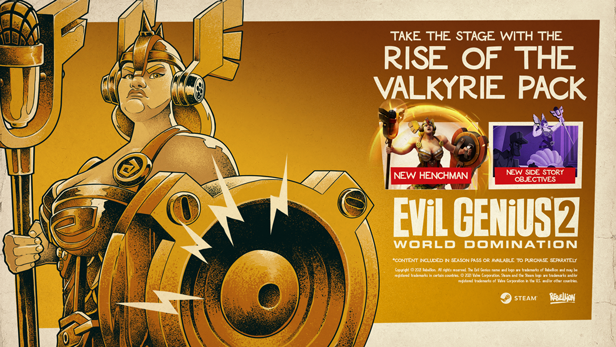 It’s time to unleash the Valkyrie’s voice! When the Evil Genius decimates the plans of a rising star in the Opera world, you better believe she’s going to seek sonic vengeance!

Your minions will need to best this devastating prima donna and her powerful friends, in a saga of shattering performances that will test their nerves, eardrums, and glassware.

Doomhilda’s destructive voice is legendary, possessing the power to stop her enemies in their path – or even inspire her allies to victory.

All the world’s a stage, and she isn’t going to share it without a fight – before you can steal the spotlight, you’ll need to steal her thunder!

Can the Evil Genius convince Doomhilda to join their side as a Henchman, or will this woman with the voice of an ‘angel’ see them facing the final curtain call?

Included in the Rise of the Valkyrie DLC Pack:
• New Henchman (Doomhilda)
• Accompanying Side Story objectives to recruit Doomhilda.