TELEPORT:
Use your right-hand stick. Point with the upper part of the stick and press the thumbstick.

CLEAR A FIELD:
Use your right-hand stick. Point with the lower part of the stick and press either the trigger or the finger trigger.

PLACE WARNING FLAGS:
Use your left-hand flags. Point with the lower part of the flags and press the trigger.

It is well known the famous game "Minesweeper", which almost everyone have played at least once!

Now you can play the new "Minesweeper" – in virtual reality!

Destroy all the mines – feel the complexity of the work of the sapper!

The game is provided with both, classic and arcade gamelay, free movement on the playing field, 3 difficulty modes, interesting and realistic control! 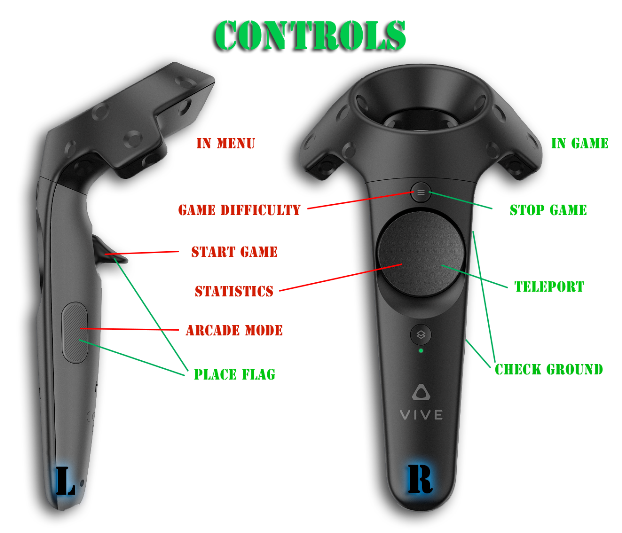 To check the ground / install the flag, insert the probe / flag in the ground, at the same time by pressing the appropriate button on the Grip or the Trigger joystick.

To replace the flag with the letter "M" on the flag with a "?" or remove all flags, insert the flag again in the same place on the playing field.

To teleport to a certain place of the playing field, move the probe to this place (the place of the hologram is highlighted) and click on the Pad button on the right joystick.