STATE OF THE GAME

Starbase launches into Early Access in a clear alpha stage, however the core features are well established and there’s fun to be had for sure. The next big upcoming updates for September, October and November can be seen below: 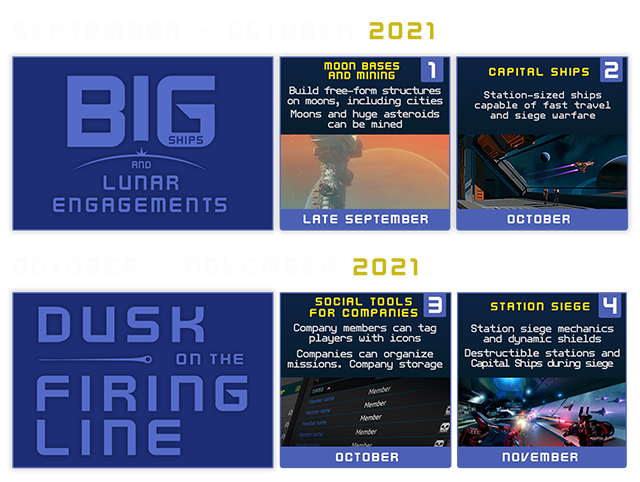 A full roadmap of ready and upcoming features can be found here: https://wiki.starbasegame.com/index.php/Roadmap

Set in a universe of vast scale and detail, the fully-destructible environment and hybrid voxel/vertex-based game mechanics enable simulations in Starbase at immense depth, giving players the ultimate freedom to exploit their innovativeness and creativity. From constructing spaceships that can endure the hazards of space, such as collision and corrosive damages, to creating massive automated factories and designing electricity and data networks, the players are free to do it their own way.

Note: Station destruction will be added in the September Siege Mechanics Update

Starbase is developed with Frozenbyte’s internal game engine that is custom-built for conquering space, enabling the use of extremely challenging combination of voxel and vertex technologies in the game. The modern engine has been built specifically with Starbase in mind and the engine’s architecture is designed to handle all the quirks of simulation, damage, building, player amounts and the ever-growing universe to match the challenges the ambitious vision of the game can pose. Similarly, all features of the game have been developed with the infinite scale and the creative freedom of the players in mind.

Starbase has been in secret development for five years without restraints and the development will continue until the game’s bold vision is achieved. In the ever-expanding space the scale can range from the unit of one bolt to massive space station structures, with exploration missions varying from journeys to nearby asteroid fields, to salvaging ship debris, and eventually to other galaxies.

In Starbase players are given the freedom to build the kind of universe they want to, and a small group of players can eventually form large factions that challenge the powers that be. Being inventive will also help, as cleverness often triumphs over brute force in Starbase, and the only limitation is the creativity of the players.

Starbase Early Access will introduce the players, the pioneers, to a new galaxy that they can begin to explore from a bunch of huge stations located at the orbit of a single planet. As the players eventually settle the entire orbit, they can start finding ways to travel to the planet’s moons and someday all the way to other planets and distant star systems. The still unoccupied universe of Starbase offers players the chance to take part in the building of the galaxy and in discovering what will be the first steps in the twilight of space travel.

Early Access allows the players to design, build & modify spaceships, explore the universe, form social connections, and earn money by mining, gathering, crafting and selling resources. The players can start building their home stations and begin the expansion of the Starbase universe together with the developers.

Starbase launches into Early Access in a clear alpha stage, however the core features are well established and there’s fun to be had for sure. The next big upcoming updates for September, October, and November can be seen below:

A full roadmap of ready and upcoming features can be found here: https://wiki.starbasegame.com/index.php/Roadmap