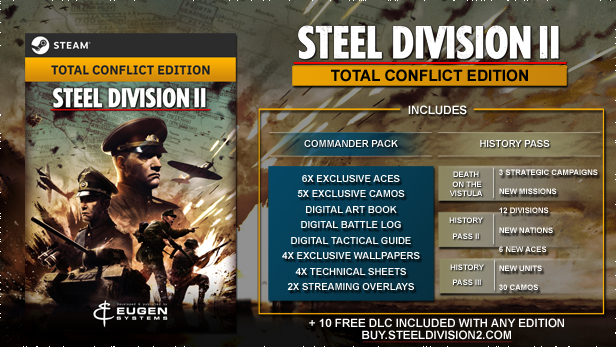 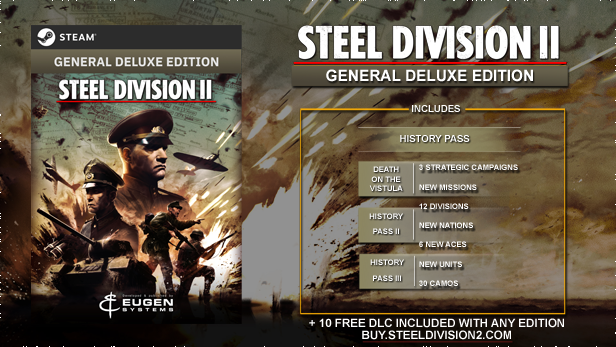 COMMAND YOUR ARMY. FIGHT YOUR BATTLES.

Steel Division 2 pushes the limits of the WW2 RTS experience. Set on the Eastern Front in 1944, this sequel of the critically acclaimed Real-Time Tactical game puts you in charge of your entire army during Operation Bagration, the Soviet offensive against Nazi armies in Bielorussia.

Play as a General in the 1:1-scale turn-based Dynamic Strategic Campaigns, as a Colonel in the epic Real-Time Tactical Battles, as an Weapon Expert in the brand-new Deck Building System.

With more than 600 units, 25 maps, and multiple game modes, Steel Division 2 lets you play as you want and offers hundreds of hours of gameplay in solo, multiplayer and coop.

Relive history in the huge single player Dynamic Strategic Campaigns: lead thousands of men on up-to 150×100 km maps, plan your battalion’ movements, manage supply and execute your strategy in week-long campaigns in this historically accurate turn-based game mode. Every battalion is the same as it was during the Operation Bagration.

Pick your side and relive this massive offensive or rewrite the course of events. Decide which battalion will take part into battle, fight every one of them in real-time tactical combat, or use autoresolve for a pure Strategic experience.

More than just another game mode, the Dynamic Strategic Campaigns are an entire new game within the game.

Field over 600 extremely detailed units, including the iconic T-34 tank, the Katyusha multiple rocket launcher and the IL-2 ground-attack aircraft! Select your division, pick the units you will send to battle, and build the perfect battlegroups in the brand new deck system, allowing more tactical freedom than ever.

Fight in the 25 new available battlefields, analyze the terrain and use your tactical skills to give the right order at the right time and dominate your enemy!