The Harvest is a fresh new take on Class-Based Hero-Shooters. Fight along with your teammates from different civilizations against other players to take control of the universe’s essence.

Define your combat style as you play, gaining and combining different abilities to become the best squad. Discover this new sci-fi universe and get ready, THE HARVEST has begun!

The Harvest goes beyond the common class systems in the shooter genre thanks to the Dynamic Class-Based System. Choose your Breacher, select your base set-up and build your full potential during combat in a flexible abilities system. 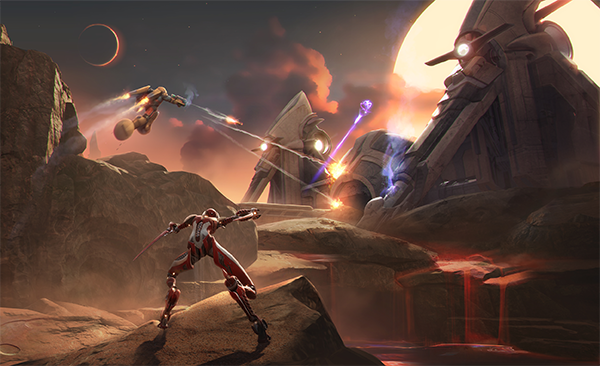 During The Harvest teamwork is rewarded, so all your teammates will benefit from the resources you get. Control the key zones of the map to gather enough resources and upgrade your Breacher. To survive The Harvest you will have to team up with your mates and build the best strategy, but if things get messy, you can always use the "Respawner" to revive the fallen.

O’Ree-Jin is an uninhabited planet that contains the remains of an ancient civilization that controlled the most precious substance in all of creation, the Essence. The planet is a zealous protector of the Essence, but it opens itself at undetermined intervals and for an undetermined time span.