[Important]
Even if you make a mistake, you can try the quiz again if you run away from Emirin for a certain period of time.

A stealth quiz game of first-person perspective.
The game is a free add-on for the base game.

Character
Emirin (Sonic-Alpha)
She was rehired as an immigration officer. 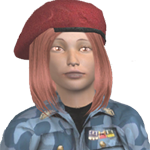 Emirin was defeated by Ran Kawasaki in the base game and was reemployed as an immigration inspector for the Cutuma Republic.
The player becomes a tourist who has come to the Republic of Cutuma, and is examined by Emirin.
For some reason, the immigration examination is a quiz, and if you make a mistake, the death penalty will be finalized by omitting a trial.

About the game mode.
Normal mode: The questions are mainly about STEAM, Sonic-Alpha Games, Base game, etc.
Cutuma Mode: A mode for fans of Cutuma 3rd. Thinking in a different way sometimes helps you to complete the game.

About game
FP Stealth Quiz Game.
If you answer all Emirin’s quizzes correctly, the game will be over.

Even if you make a mistake, you can try the quiz again if you run away from Emirin for a certain period of time.

How to play
You can select this game when you press "play" on the STEAM application.